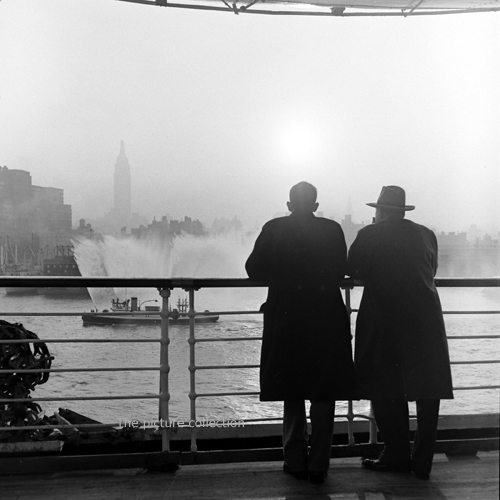 Drawn from Ed Clark’s extensive personal archive of photographs, negatives, contact sheets, and scrapbooks, these two volumes reveal the work of a key figure from the golden age of American photojournalism. From the pageantry of politics to the rhythms of small-town life, from movie stars to the working class, Clark covered the defining personalities and events of his age.

Ed Clark is one of the twentieth century’s most fascinating and important “unknown” photographers. A gifted photojournalist, Clark began his career in 1929 with The Tennessean newspaper in Nashville and went on to work for 22 years for Life magazine. He photographed many of Life’s most important assignments during the period of the magazine’s greatest cultural impact; Clark’s images helped shape a nation’s sense of itself and the world.

His vast range of subjects includes the Nuremberg war crimes trials, the conflict over civil rights in the late 1940s and early ’50s, Hollywood stars and the movie industry of the ’50s, the people and arts of the Soviet Union, and the White House during the Eisenhower and Kennedy administrations. Through Clark’s eyes, we witness some of the central episodes and themes of the post-war world.

Ed Clark (1911-2000) was the quintessential American news photographer.
Clark started his career while still in high school, toiling as an apprentice in the darkroom of his hometown Nashville Tennessean.

Two years later, a precocious eighteen, he was promoted to assistant photographer and began lugging an 8×10-inch studio camera—outmoded for journalism but the only tool available—through the streets of Tennessee’s capital city. His assignments ran the gamut, from political ”grip-and-grin” photo opportunities to features on local citizens, to on-the-spot coverage of parades and car accidents.

In 1942, Clark sold one of his pictures to Life magazine. Other freelance assignments followed, and the young cameraman was soon hired away from the Tennessean by Life’s legendary director of photography, Wilson Hicks. Only 31, Clark joined the weekly’s Olympian staff of photojournalists, which included such legendary figures as Margaret Bourke-White, Alfred Eisenstaedt, W. Eugene Smith, and Philippe Halsman.
Wielding the new smaller cameras and faster films, with seemingly unlimited schedules and budgets to shape their picture stories, Life photographers worked at the pinnacle of their profession and reached the largest audiences. By the time of Clark’s arrival, Life was one of the leading publications in the United States, with a weekly distribution in the millions.

Based first in Nashville, and later in Los Angeles and Washington, D.C., Clark perfectly fit the profile of the Life photographer. Energetic, dashing, and charismatic, he traveled the world for 22 years while raising a family with his wife Joyce.
A proficient generalist, he was guided by the magazine’s humanist focus and broad audience, perfecting a low-key, empathetic style. In Los Angeles, he excelled at Hollywood portraiture; in Washington, he was a favorite of national leaders and newsmakers.
Legendary journalist Hugh Sidey recalled that Clark “relished the power game, charmed his subjects… like all of Life’s great photographers he had an endless curiosity about almost anything that happened.” By the end of his tenure, Clark had contributed some of the most iconic and best-loved photographs ever to be reproduced in the magazine.

His eyesight failing, Clark left his cameras behind in 1962 to forge a second career in homebuilding. But his secure position among the pioneers of photojournalism continues to resonate with new generations of students and scholars, as they discover Life’s rich depiction of 20th century American history. In the words of Clark’s biographer Frank “Tico” Herrera, “native ability combined with street smarts enabled Ed to rise from hometown newspaper cub photographer to staff photographer for the world’s best-known picture magazine.”