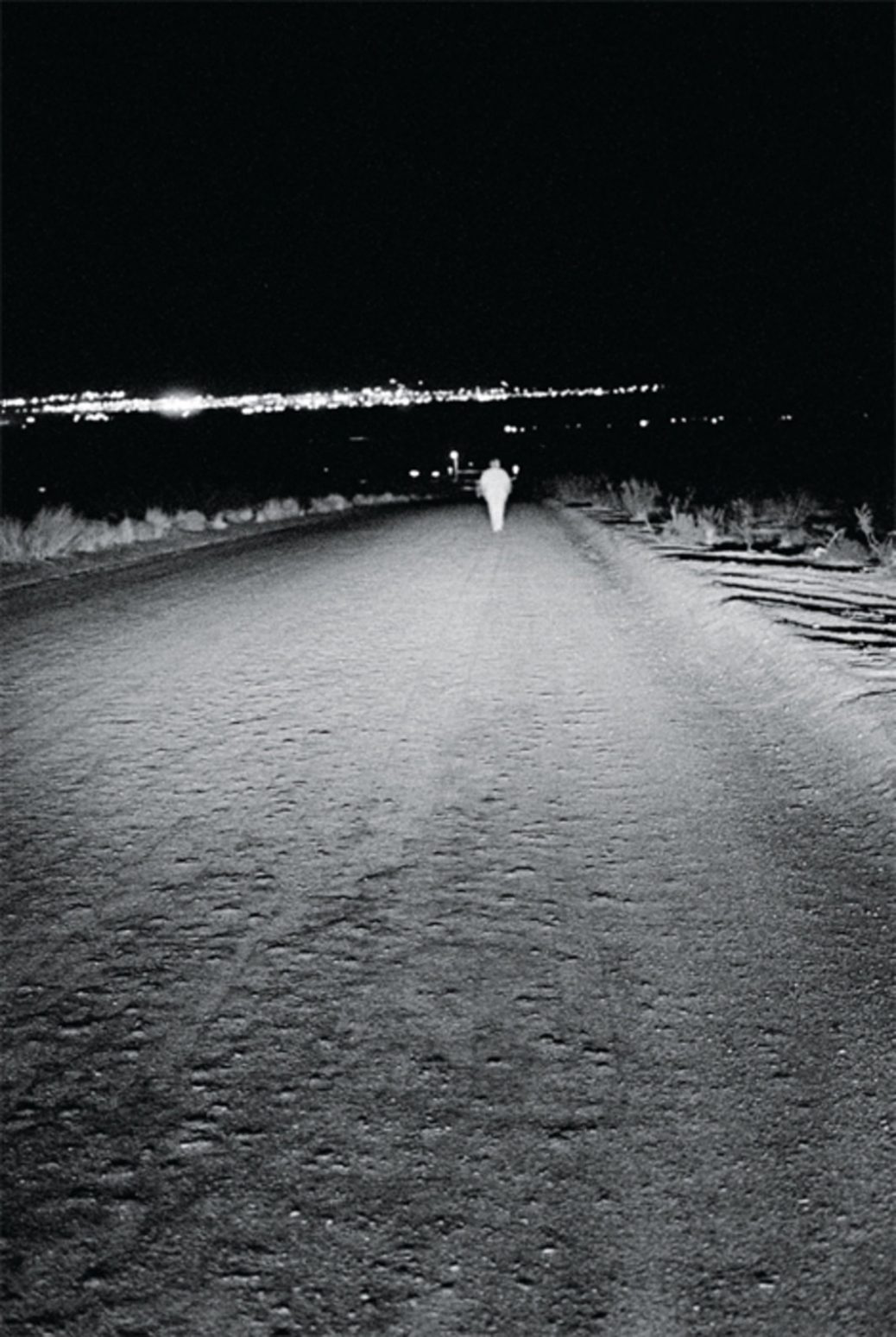 Cameras and their users are caught between the universal and the particular. Photography and photographs; humanity and whatever specific kind of human we happen to be.
There is at least something existentially universal about Divola’s photographic adventures. The lone observer moving through the world and reflecting upon it through various camera possibilities. But nobody is truly universal, or only universal. We each come wrapped in our particulars, just as each and every photograph belongs to the universe of photography precisely insofar as it is particular. Forever the two.
SCAPES contains some of Divola’s greatest series in Black and White like “Four Landscapes”, “As Far As I Could Get” and “Dogs chasing my car in the desert”. Designed by Federico Carpani, text by David Campany.

“When I look at Divola’s photographs, I sense something universal because I sense all the particulars. Yes, a white, male, middle-class Southern Californian, post-conceptual artist of the kind that makes these kinds of photographs. But nobody makes photographs quite like Divola. He is one of a kind, and therein are the universal and the particular.”
[from the text by David Campany]

Spanning over 40 years, John Divola’s work has consistently questioned the limits of photography, interweaving sculpture, installation, and performance to highlight the inherent tensions within the medium.

Divola’s imagery often examines the Southern Californian landscape, including urban Los Angeles or the nearby ocean, mountains, and desert. Initially inspired by Minimalist and Conceptual work while in college, which he accessed predominantly through photographic reproductions, Divola was one of the first artists to highlight the role of photography in mediating our experience of the world and our surroundings. Between 1973 and 1975, without a studio of his own, Divola traveled across Los Angeles in search of dilapidated properties in which to make photographs. Armed with a camera, spray paint, string and cardboard, Divola vandalized vacant homes with abstract constellations of graffiti-like marks, ritualistic configurations of string hooked to pins, and torn arrangements of cards, before cataloging the results. Entitled Vandalism Series, this early body of work informed the trajectory of Divola’s career, in which he deliberately blurs the boundaries between reality and artifice.

Over the course of his career, Divola has produced many similar projects involving an extended engagement with a particular site over time. In a more recent series, George Air Force Base (2015-2020), Divola photographed the abandoned housing area at the decommissioned George Air Force Base in Victorville, California. We are shown scenes of dereliction – crumbling walls revealing layers of paint and plaster, in which Divola’s gestural interventions in the form of painted shapes offer a surprising contrast. Here, Divola captures the tension between the observation of the specific and the insistence of the abstract.

Born in Los Angeles in 1949, Divola earned an MFA from University of California, Los Angeles in 1974, where he studied under photographer Robert Heinecken. Since 1975 he has taught photography and art at numerous institutions including California Institute of the Arts (1978-1988), and since 1988 he has been a Professor of Art at the University of California, Riverside. Since 1975, Divola’s work has been featured in numerous solo exhibitions in the United States, Japan, Europe, Mexico, and Australia, including Galerie Marquardt, Paris, 1990; Laura Bartlett Gallery, London 2012: Kunstverein Freiburg, Germany; Los Angeles County Museum of Art, 2013; Wallspace Gallery New York, 2014; and Palm Springs Art Museum, 2019. His work can be found in numerous public collections including Centre Pompidou, Paris, France; Getty Museum, Los Angeles, CA; Metropolitan Museum of Art, New York, NY; The Museum of Modern Art, New York, NY; Victoria and Albert Museum, London, England; and The Whitney Museum of American Art, New York, NY. Among Divola’s Awards are Individual Artist Fellowships from the National Endowment for the Arts (1973, 1976, 1979, 1990), a John Simon Guggenheim Memorial Fellowship (1986), a Fintridge Foundation Fellowship (1998), a City of Los Angeles Artist Grant (1999) and a California Arts Council Individual Artist Fellowship (1998). (via YanceyRichardson.com/)