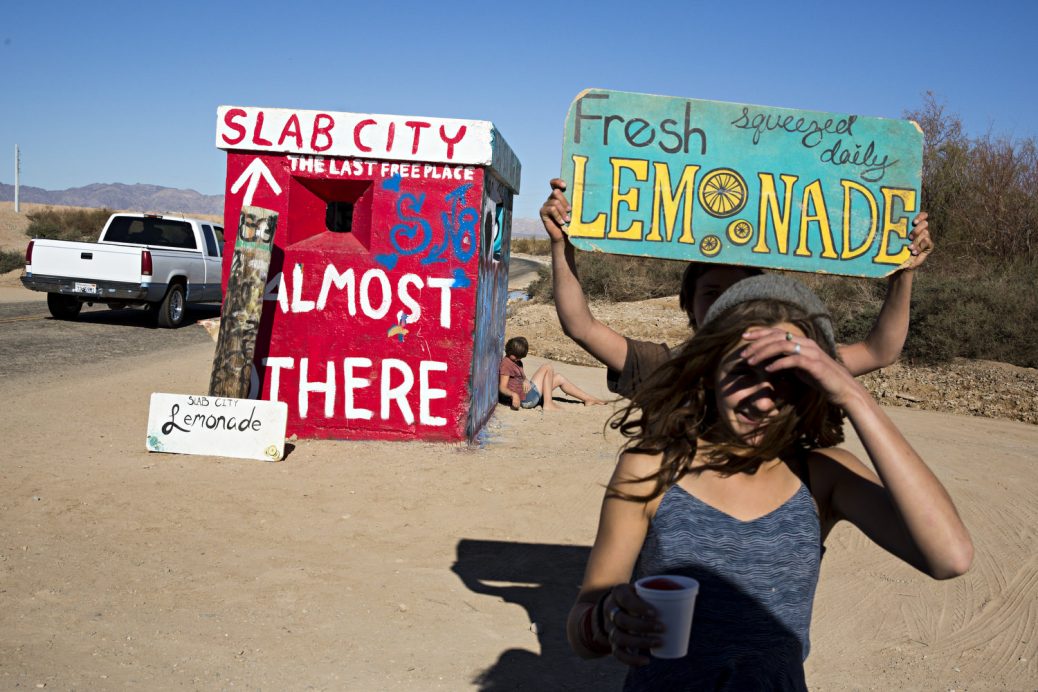 Into the Fire is Matt Stuart’s second book of photographs following on from his critically acclaimed ‘All that life can Afford’.
Into the Fire documents the daily lives of people who live in Slab City, an off-grid community based on a former military base in the Sonoran desert, just north of the Mexican border.

It is home to travelers, dog lovers, thieves, military veterans, artists, and inventors. Its population numbers thousands throughout the winter, in the summer, when temperatures can exceed 120°F (49°C) it dwindles into the low hundreds. True ‘Slabbers’ are the people who have managed to survive two summers. These are the people Matt befriended and photographed.

This is a world where people build earth-covered bunkers to live in and bathe in muddy desert springs, tires are used as decorative wreaths, and a fork in the road is signposted with an oversized plywood fork.
Slab City invites people to come as they are. Most Slabbers struggled in a world of paying rent and small talk, disadvantaged by their lack of social conformity. The Slabs provide refuge.
Accepting other flaws is a step towards accepting yourself.

“I am not sure which came first, being nosey or an interest in ‘street photography’, but a fascination with people and the way they live their lives is why I enjoy the business so much.
I can’t hide behind lights and technology, I am reliant on a small camera, patience and lots of optimism. But what I get in return is the chance to make an honest picture which people know immediately is a genuine moment and which hopefully burrows deep into their memories.” (Matt Stuart)

Matt Stuart (b. 1974) was raised in the leafy suburbs of Harrow, North West London. He admits to a less than distinguished school career. However, was called upon aged 11 to play a trumpet solo in front of the Queen Mother. Her Majesty’s reaction is not recorded.
A little later, in 1986, Matt discovered skateboarding after watching the film “Back to the Future”. Skating occupied his every waking moment until 1994 when he looked up from the half-pipe and noticed that girls had got a lot more interesting.

He also indulged in a brief, ill-advised affair with Kung Fu. Matt’s father, keenly aware that his son would never be the next Bruce Lee, introduced him to photography, handing over books by Robert Frank & Henri Cartier-Bresson. Ever since then, photography has been Matt’s overriding passion, although he’s still quite interested in skateboards and girls.