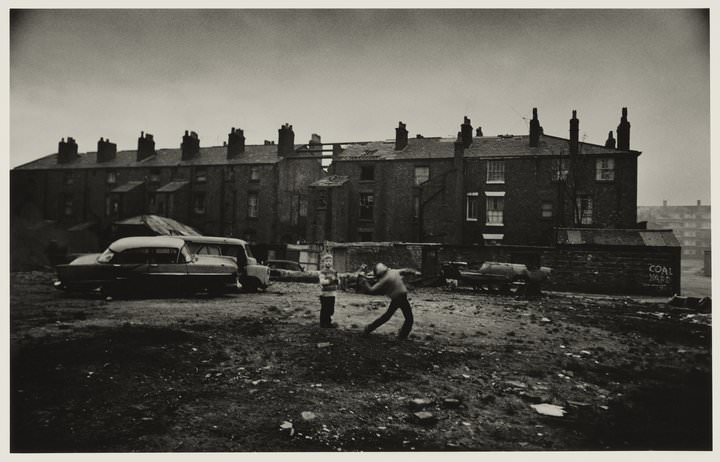 Tate Liverpool presents a major retrospective of the legendary British photographer Sir Don McCullin. Renowned as one of Britain’s greatest living photographers, McCullin has captured images of conflict from around the world including Vietnam, Northern Ireland, Lebanon, and Biafra. Often taken at great personal risk, these unforgettable photographs will be shown alongside McCullin’s work made in the north of England, his travel assignments, and his long-term engagement with landscape. Originally shown at Tate Britain in spring 2019, the exhibition presents more than 250 photographs and showcases the scope and achievements of his career.

In addition to the images shown at Tate Britain, there will be a special selection of photographs depicting the life and industrial scenes of Liverpool and other northern towns and cities during the 1960s and 70s.
Alongside McCullin’s hand-printed silver gelatin prints, the exhibition also includes his magazine spreads, contact sheets, helmet, and the Nikon camera which took a bullet for him in Cambodia.

For years, McCullin has been documenting the physical remains of the Roman Empire in north African and eastern Mediterranean landscapes, including the ancient site of Palmyra, Syria. He returned to Syria in 2017 to document the deliberate destruction and demolitions undertaken by the so-called Islamic State. The exhibition ends with these powerful works including The theatre on the Roman city of Palmyra, partly destroyed by Islamic State fighters 2017.

“Don McCullin” is touring to Tate Liverpool from Tate Britain where it was displayed 5 February – 6 May 2019. The exhibition was originally conceived by Simon Baker, Director of The Maison Européene de la Photographie, Paris, with Shoair Mavlian, Director of Photoworks, assisted by Aïcha Mehrez, Assistant Curator of Contemporary British Art, Tate Britain. The exhibition at Tate Liverpool is co-curated by Tamar Hemmes, Assistant Curator Tate Liverpool, and Aïcha Mehrez. It is accompanied by a fully illustrated catalog.

Sir Don McCullin is arguably Great Britain’s most renowned photojournalist having documented many major conflicts of the 20th and 21st Century since the 1960s. His lifetime contribution to photojournalism continues today and lives on in the collection of many museums.
Don McCullin was born in 1935 in London’s Finsbury Park, a poor and rough area at the time.

He began taking photographs in 1958, documenting his surroundings and the local community in his native Finsbury Park, London. In 1959 his photograph The Guvnors, a portrait of a notorious local gang, was published in The Observer, launching his career as a photojournalist. In 1961, McCullin traveled to Germany on his own initiative, funding the trip himself, to photograph the building of the Berlin Wall. The images he took won him a British Press Award and a permanent contract with The Observer.

Working first for The Observer and then The Sunday Times Magazine, McCullin went on to capture major conflicts around the world from Vietnam and the Congo to Cyprus and Beirut. The exhibition includes some of McCullin’s most iconic and poignant photographs including Shell-shocked US Marine, The Battle of Hue 1968, and Starving Twenty Four Year Old Mother with Child, Biafra 1968. Alongside McCullin’s hand-printed silver gelatin prints, the exhibition also includes his magazine spreads, contact sheets, helmet, and the Nikon camera which took a bullet for him in Cambodia.

While McCullin has been best known as a photojournalist and war correspondent, he has also consistently engaged in documentary photography in Britain. Having been born in a working-class family in London, McCullin identified with the most deprived parts of the north of England. He recognized his own origins in the poor conditions of those he photographed and was committed to the practice of ‘reporting back’ and publicly highlighting these areas that were largely unseen by the British middle classes.

Discussing his work, McCullin has said: “Photography isn’t looking, it’s feeling. If you can’t feel what you’re looking at, then you’re never going to get others to feel anything when they look at your pictures.”

McCullin has also been influenced by the meditative landscapes of the British countryside, particularly Somerset, where he has lived for the past 36 years. Landscapes became a focus for McCullin from the 1980s onwards and he has immersed himself in the huge panoramas within walking distance of his home.
McCullin’s most recent photographs for his book Southern Frontiers connect the two key strands of his work: conflict and landscape.