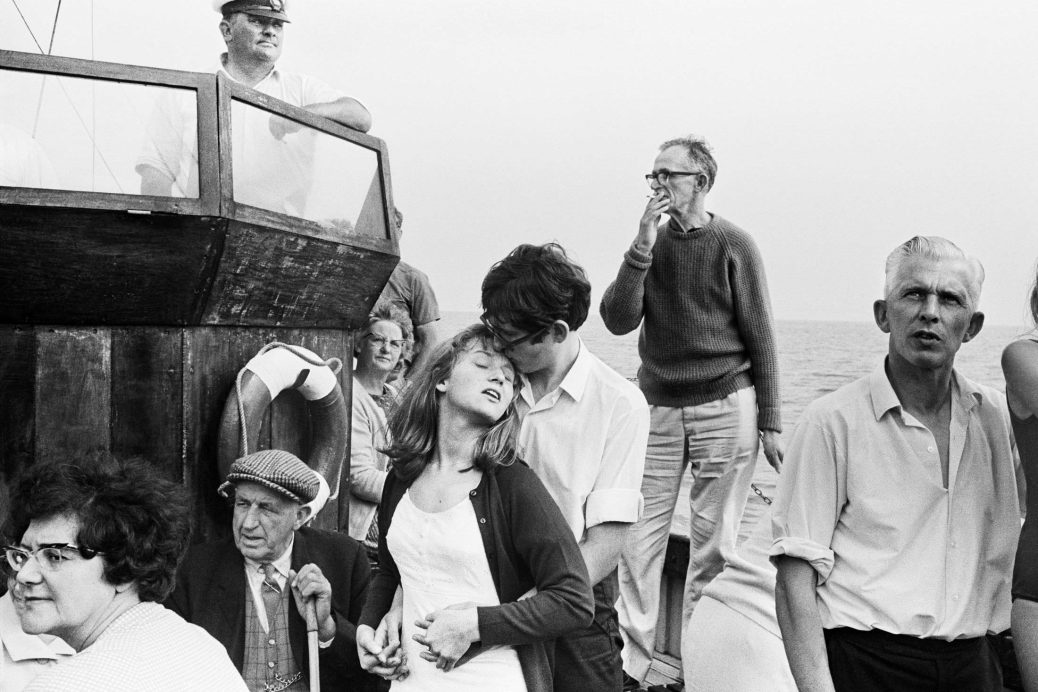 The exhibition and book focus on photographs taken between 1966 – 1969 as Ray-Jones, driven by curiosity, traveled across the country to document English social customs and what he saw as a disappearing way of life.

Speaking of his series back then, Ray-Jones remarked:
“I have tried to show the sadness and humor in a gentle madness that prevails in people. The situations are sometimes ambiguous and unreal, and the juxtapositions of elements seemingly unrelated, and yet the people are real. This, I hope, helps to create a feeling of fantasy. Photography can be a mirror and reflect life as it is, but I also think that perhaps it is possible to walk, like Alice, through the looking glass, and find another kind of world with the camera.”

The work of Tony Ray-Jones had a profound influence on photographer Martin Parr.
In this short film from the 2014 Tony Ray-Jones exhibition at National Science and Media Museum, Parr discusses the English seaside photography of Ray-Jones, and his own study of the decline of the small town in the north of England.

Tony Ray-Jones (1941 – 1971) was born in Wells, Somerset and studied graphic design at the London School of Printing.

In 1960, aged just 19, Ray-Jones won a two-year scholarship to Yale in the United States. Following a chance meeting with Alexey Brodovitch, he attended his classes at the Design Laboratory in New York alongside fellow students including Robert Frank, Irving Penn, and Garry Winogrand. He returned to England in 1966 and whilst supporting himself through photographic assignments, he traveled around the country in a VW camper van. His work was exhibited at the ICA, London in 1969 alongside of Dorothy Bohm, Don McCullin and Enzo Ragazzini.

In 1971 he returned to the United States to take up a teaching post at the San Francisco Art Institute and began planning future projects before being diagnosed with Leukemia in 1972. He returned to the UK for treatment and died aged just 31. The first monograph of his work, A Day Off (1974) was published posthumously and a retrospective of his work was held at the National Media Museum in 2004. In 2013, Media Space at the Science Museum, London displayed his work alongside that of Martin Parr in the touring exhibition Only in England.

Tony Ray-Jones (7 June 1941- 13 March 1972) was an influential British post-war photographer who is best remembered for his light-hearted, quirky images of the English social landscape. The documentation of his fellow countrymen engaged in various leisure activities embodied a uniquely distinctive vision; quite a departure from the objective style of the 1960s war photographer. Ray-Jones’ subjective and artistic approach to photography subsequently influenced a new generation of independent photographers emerging in 1970s Britain including Martin Parr, Daniel Meadows, Chris Steele-Perkins, and Simon Roberts.