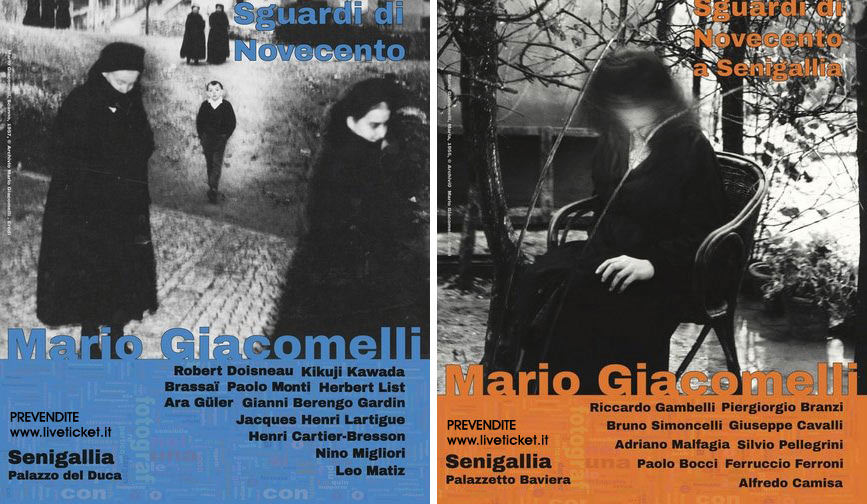 Senigallia City of Photography, on the occasion of the twenty years since the death of Mario Giacomelli, presents the exhibition Sguardi di Novecento: Giacomelli e il suo tempo.

Inaugurated last February, to be immediately closed due to the coronavirus emergency, on May 20th the exhibition Sguardi di Novecento. Giacomelli e il suo tempo will reopen in Senigallia, extending the closing date to 27 September 2020.

The exhibition will be divided into two sections: an international part curated by ONO contemporary art at Palazzo del Duca which will host 20 photos of Giacomelli in comparison with about 90 shots of large photographs from the mid-twentieth century; and Palazzetto Baviera Sguardi di Novecento in Senigallia. The Misa Association, for an artistic photograph. Works from 1954 to 1958, by the Giacomelli Family, which offers a selection of photographic works by members of the Misa Group, from the civic collection Città di Senigallia.

The exhibition is inspired by and inspired by The Photographer’s Eye, the great exhibition curated by John Szarkowski – director of the Department of Photography at the MoMA in New York from 1962 to 1991 – staged right in the New York museum in 1964. That was the first real recognition Giacomelli’s international exhibition which was exhibited together with international authors such as Richard Avedon, Brassaï, Henri Cartier-Bresson, Robert Doisneau, Walker Evans, and many others.

“[…] the photographs reproduced here were taken over the course of about one hundred and twenty-five years. They were shot for disparate reasons, by men moved by different intentions and with different degrees of talent. In fact, they have very little in common, if not the success they have in common and a less shared: these images are unequivocally photographs. The vision they have in common does not belong to a school or an aesthetic theory, but to photography itself », Szarkowski wrote in the introduction to the exhibition catalog, and from here started the research for Sguardi di Novecento: Giacomelli e il suo tempo that Senigallia City of Photography wanted to organize to pay homage to one of its most illustrious citizens twenty years after his death.

Together with the exhibition, the homonymous catalog with a preface by Walter Guadagnini, director of Camera – Italian Center for Photography in Turin.

More information about the catalog:
https://www.silvanaeditoriale.it/