The New Woman Behind the Camera 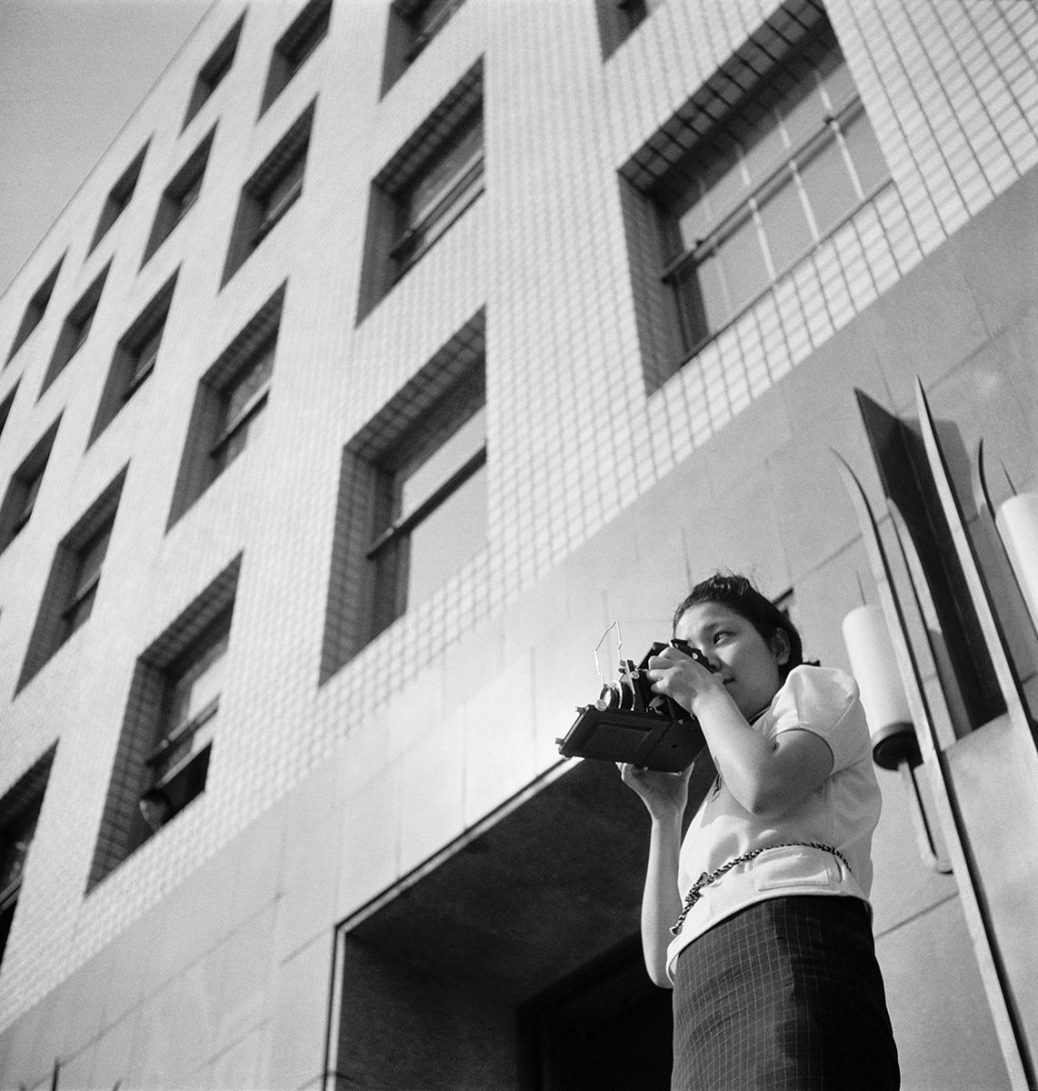 The New Woman Behind the Camera

During the 1920s, the iconic New Woman was splashed across the pages of magazines and projected on the silver screen. As a global phenomenon, she embodied an ideal of female empowerment based on real women making revolutionary changes in life and art. Featuring more than 120 photographers from over 20 countries, the groundbreaking exhibition, The New Woman Behind the Camera, explores the diverse “new” women who embraced photography as a mode of professional and personal expression from the 1920s to the 1950s. The first exhibition to take an international approach to the subject, it examines how women brought their own perspectives to artistic experimentation, studio portraiture, fashion and advertising work, scenes of urban life, ethnography, and photojournalism, profoundly shaping the medium during a time of tremendous social and political change. Accompanied by a fully illustrated catalog, this landmark exhibition will be on view from October 31, 2021, through January 30, 2022, in the West Building of the National Gallery of Art, Washington. Right now is on view at The Metropolitan Museum of Art, New York, from July 2 through October 3, 2021.

In an era when traditional definitions of womanhood were being questioned, women’s lives were a mix of emancipating and confining experiences that varied by country. Many women around the world found the camera to be a means of independence as they sought to redefine their positions in society and expand their rights. This exhibition presents a geographically, culturally, and artistically diverse range of practitioners to advance new conversations about the history of modern photography and the continual struggle of women to gain creative agency and self-representation.

“This innovative exhibition reevaluates the history of modern photography through the lens of the New Woman, a feminist ideal that emerged at the end of the 19th century and spread globally during the first half of the 20th century,” said Kaywin Feldman, director, National Gallery of Art. “The transnational realities of modernism visualized in photography by women such as Lola Álvarez Bravo, Berenice Abbott, Claude Cahun, Germaine Krull, Dorothea Lange, Niu Weiyu, Tsuneko Sasamoto, and Homai Vyarawalla offer us an opportunity to better understand the present by becoming more fully informed of the past.”

This landmark exhibition critically examines the extraordinary impact women had on the practice of photography worldwide from the 1920s to the 1950s. Photographers such as Berenice Abbott, Ilse Bing, Lola Álvarez Bravo, Madame d’Ora, Florence Henri, Elizaveta Ignatovich, Germaine Krull, Dorothea Lange, Dora Maar, Niu Weiyu, Eslanda Goode Robeson, Tsuneko Sasamoto, Gerda Taro, and Homai Vyarawalla, among many others, emerged at a tumultuous moment in history that was profoundly shaped by two world wars, a global economic depression, struggles for decolonization, and the rise of fascism and communism. Against the odds, these women were at the forefront of experimentation with the camera and produced invaluable visual testimony that reflects both their personal experiences and the extraordinary social and political transformations of the era.
Organized thematically in eight galleries, The New Woman Behind the Camera illustrates women’s groundbreaking work in modern photography, exploring their innovations in the fields of social documentary, avant-garde experimentation, commercial studio practice, photojournalism, ethnography, and the recording of sports, dance, and fashion. By evoking the global phenomenon of the New Woman, the exhibition seeks to reevaluate the history of photography and advance new and more inclusive conversations on the contributions of female photographers.

Known by different names, from nouvelle femme and neue Frau to modan gāru and xin nüxing, the New Woman was easy to recognize but hard to define. Fashionably dressed with her hair bobbed, the self-assured cosmopolitan New Woman was arguably more than a marketable image. She was a contested symbol of liberation from traditional gender roles. Revealing how women photographers from around the world gave rise to and embodied the quintessential New Woman even as they critiqued the popular construction of the role, the exhibition opens with a group of compelling portraits and self-portraits. In these works, women defined their positions as professionals and artists during a time when they were seeking greater personal rights and freedoms.
With better access to education and newfound independence, female photographers emerged as a major force in studio photography. From running successful businesses in Berlin, Buenos Aires, London, and Vienna, to earning recognition as one of the first professional female photographers in their home country, women around the world, including Karimeh Abbud, Steffi Brandl, Trude Fleischmann, Annemarie Heinrich, Eiko Yamazawa, and Madame Yevonde, reinvigorated studio practice. A collaborative space where both sitters and photographers negotiated gender, race, and cultural difference, the portrait studio was also vitally important to African American communities which sought to represent and define themselves within a society that continued to be plagued by racism. Photography studios run by Black women, such as Florestine Perrault Collins and Winifred Hall Allen, thrived throughout the United States, and not only preserved likenesses and memories, but also constructed a counternarrative to the stereotyping images that circulated in the mass media.
With the invention of smaller lightweight cameras, a growing number of women photographers found that the camera’s portability created new avenues of discovery outside the studio. In stunning photographs of the city, photographers such as Alice Brill, Rebecca Lepkoff, Helen Levitt, Lisette Model, Genevieve Naylor, and Tazue Satō Matsunaga used their artistic vision to capture the exhilarating modern world around them. They depicted everyday life, spontaneous encounters on the street, and soaring architectural views in places like Bombay (now Mumbai), New York, Paris, São Paulo, and Tokyo, revealing the multiplicity of urban experience. Many incorporated the newest photographic techniques to convey the energy of the city, and the exhibition continues with a gallery focused on those radical formal approaches that came to define modern photography. Through techniques like photomontage, photograms, sharp contrasts of light and shadow, extreme cropping, and dizzying camera angles, women including Aenne Biermann, Imogen Cunningham, Dora Maar, Tina Modotti, Lucia Moholy, and Cami Stone pushed the boundaries of the medium.

Women also produced dynamic pictures of the modern body, including innovative nude studies as well as sport and dance photography. Around the world, participation in spectator and team sports increased along with membership in fitness and hygiene reform movements. New concepts concerning health and sexuality along with new attitudes in movement and dress emphasized the body as a central site of experiencing modernity. On view are luminous works by photographers Laure Albin Guillot, Yvonne Chevalier, Florence Henri, and Jeanne Mandello who reimagined the traditional genre of the nude. Photographs by Irene Bayer-Hecht and Liselotte Grschebina highlight joyous play and gymnastic exercise, while Charlotte Rudolph, Ilse Bing, Trude Fleischmann, and Lotte Jacobi made breathtaking images of dancers in motion, revealing the body as an artistic medium.

During the modern period, a growing number of women pursued professional photographic careers and traveled widely for the first time. Many took photographs that documented their experiences abroad and interactions with other cultures as they engaged in formal and informal ethnographic projects.
The exhibition continues with a selection of photographs and photobooks by women, mainly from Europe and the United States, that reveal a diversity of perspectives and approaches. Gender provided some of these photographers with unusual access and the drive to challenge discriminatory practices, while others were not exempt from portraying stereotypical views. Publications by Jette Bang, Hélène Hoppenot, Ella Maillart, Anna Riwkin, Eslanda Goode Robeson, and Ellen Thorbecke exemplify how photographically illustrated books and magazines were an influential form of communication about travel and ethnography during the modern period. Other works on display include those by Denise Bellon and Ré Soupault, who traveled to foreign countries on assignment for magazines and photo agencies seeking ethnographic and newsworthy photographs, and those by Marjorie Content and Laura Gilpin, who worked on their own in the southwestern United States.

The New Woman—both as a mass-circulating image and as a social phenomenon—was confirmed by the explosion of photographs found in popular fashion and lifestyle magazines. Fashion and advertising photography allowed many women to gain unprecedented access to the public sphere, establish relative economic independence, and attain autonomous professional success. Producing a rich visual language where events and ideas were expressed directly in pictures, illustrated fashion magazines such as Die Dame, Harper’s Bazaar, and Vogue became an important venue for photographic experimentation by women for a female readership.
The rise of the picture press also established photojournalism and social documentary as dominant forms of visual expression during the modern period. Ignited by the effects of a global economic crisis and growing political and social unrest, numerous women photographers including Lucy Ashjian, Margaret Bourke-White, Kati Horna, Elizaveta Ignatovich, Kata Kálmán, Dorothea Lange, and Hansel Mieth engaged a wide public with gripping images. So-called soft topics such as “women and children,” “the family,” and “the home front” were more often assigned to female photojournalists than to their male counterparts. The exhibition asks viewers to question the effect of having women behind the camera in these settings. Pictures produced during the war, from combat photography by Galina Sanko and Gerda Taro to images of the Blitz in London by Thérèse Bonney and the Tuskegee airmen by Toni Frissell, are also featured. At the war’s end, haunting images by Lee Miller of the opening of Nazi concentration camps and celebratory images of the victory parade of Allied Forces in New Delhi by Homai Vyarawalla made way for the transition to the complexities of the postwar era, including images of daily life in US-occupied Japan by Tsuneko Sasamoto and the newly formed People’s Republic of China by Hou Bo and Niu Weiyu.
The New Woman Behind the Camera acknowledges that women are a diverse group whose identities are defined not exclusively by gender but rather by a host of variable factors. It contends that gender is an important aspect in understanding their lives and work and provides a useful framework for analysis to reveal how photography by women has powerfully shaped our understanding of modern life.