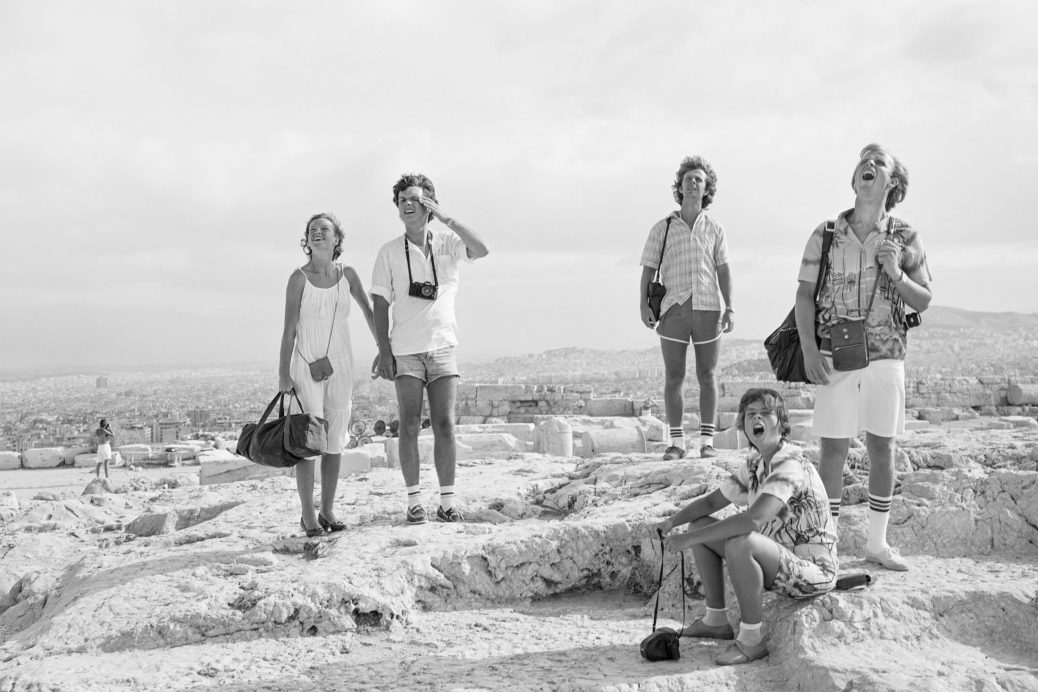 In 1983-84 Tod Papageorge spent a month each summer on the Acropolis in Athens, producing a body of work that seems lost in time, fusing the ancient with the modern.
“I stayed at a nice hotel, the Zafolia, five minutes from the Acropolis, where every surface in my room was marble, and where I did laps in the pool every evening, driving the hotel staff crazy.

I usually ate lunch at a vegetarian restaurant in the Plaka, right under the Parthenon. I just liked the food. Have no memory at all of where I’d go for dinner. Very solitary the whole time. That was it: up The Hill in the morning, down for lunch, usually back up for more after that, then a swim and dinner somewhere nearby.” – Tod Papageorge

Tod Papageorge is an American photographer whose career began in the New York City street photography movement of the 1960s. He is the recipient of two Guggenheim fellowships and two NEA Visual Artists Fellowships. His work is in public collections including the Museum of Modern Art and the Art Institute of Chicago. Between 1979 and 2013 he directed the graduate photography department at the Yale University School of Art.

He was born in Portsmouth, New Hampshire in 1940, and began to photograph in 1962 during his last semester at the University of New Hampshire. Little more than a month later, after running across reproductions of two pictures made by Henri Cartier-Bresson, he decided to be a photographer.

Following his graduation, Papageorge worked for about a year as a map clerk in an insurance company in San Francisco and then as an attendant at a mental hospital in Boston. In 1965 he spent ten months photographing in Spain and Paris and, late that year, returned to the states and moved to New York, where he soon met Robert Frank and was invited by Garry Winogrand to participate in a workshop that Winogrand was about to initiate at his apartment on Sunday evenings.

It was a heady moment for photographers in New York: Frank’s “The Americans”, published in 1958, and the appointment in 1962 of John Szarkowski as the Director of the Department of Photography at the Museum of Modern Art formed the backdrop for what turned out to be a critical transition point in the evolution of American photography in general, and urban photography in particular.

After grappling with the challenging problem of photographing on the streets of Manhattan through the 1960s, Papageorge was awarded a Guggenheim Fellowship in 1970 to photograph “spectator sports in America.” Working during an especially divisive period of the Vietnam War, he employed Leicas and wide-angle lenses to fill his pictures “up to the brim and even above the brim” with incident and drama. These photographs of iconic events (the World Series, the Cotton Bowl, etc.) and equally iconic spaces (the old Yankee stadium, Legion Field in Birmingham) — seventy of which make up “American Sports, 1970, or How We Spent the War in Vietnam”, published in 2008 by Aperture — bind what seem to be the hysterical energies of games and a distant war together in a powerful metaphorical knot.

Back in New York, Papageorge took up teaching photography in a number of schools to support himself, an occupation that eventually landed him at the Yale University School of Art, where he was appointed the Walker Evans Professor of Photography and Director of Graduate Studies in Photography in 1979, positions he continues to hold.
In 1977, Papageorge curated “Public Relations”, an exhibition of Garry Winogrand’s photographs, at the Museum of Modern Art; while he worked on the Winogrand exhibition in 1977, Papageorge, with the support of a second Guggenheim Fellowship, began to photograph with mid-format cameras in Central Park.

This project, which demanded a more deliberate and concentrated style of picture-making than his earlier 35mm work, continued through periods of varying intensity until he moved out of New York in 1993. “Passing Through Eden”, a collection of these photographs, was published by Steidl in 2007 and exhibited in New York (at Pace MacGill), Athens, and London, where it led to Papageorge being selected as one of the four artists shortlisted for the Deutsch Børse Prize in 2009.

Photographs he made from 1978-1980 at New York’s famed Studio 54 were published as a book in 2014.
In addition to his Guggenheim Fellowships, Tod Papageorge has received two National Endowment for the Arts grant and was a Resident during the summer of 2009 at the American Academy of Rome, where he photographed in color for the first time in twenty years.
His work is represented in more than thirty major public collections, including those of the Museum of Modern Art, the Art Institute of Chicago, the San Francisco Museum of Modern Art, and the Bibliotheque Nationale in Paris. ( Bio courtesy Pace / MacGill Gallery)