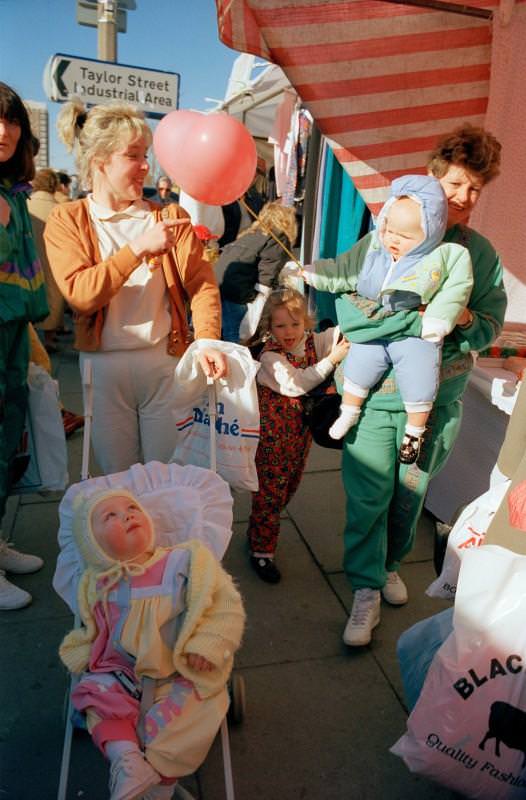 Before moving to Merseyside in 1978 and becoming the “photie man” photographing people on streets, in pubs and nightclubs, markets and docks, workplaces, parks, and football grounds, Tom Wood used to collect old postcards and magazines. The exhibition Mothers, Daughters, Sisters brings together a corpus of prints selected among Tom Wood’s eponymous series, shot on the streets of Liverpool and the surrounding area between the early 1970s and the late 1990s, alongside a selection of found family postcards from his above-mentioned personal collection.

The selection of works presented here appears as a rare occasion to put in perspective one aspect of Wood’s prolific and wide-ranging photographic practice with the personal vernacular collection that has impacted his work. Mothers, Daughters, Sisters strikes the viewer with its attention to the mundane and the everyday life of common people. Sometimes posed and sometimes caught on the go, these scenes from street life that Tom Wood captured with his camera impact us by the deep sense of intimacy and feminine complicity they convey.

Originally trained as a painter, Irish born Tom Wood is better known as a street photographer, with his earlier work focused on the Merseyside area (1978-2001). Following a number of successful photo-book releases such as his infamous nightclub series ‘Looking for Love’ (1989) and ‘Photie Man’ (2005), Tom’s work was recently on display at The Photographers’ Gallery with his show ‘Men and Women‘, which is also being released through German Publisher Steidl in the form of 2 books.

Born in Ireland, Wood moved to Merseyside in 1975 and lived there until 2003, when he moved to his current home in North Wales. Hundreds of years ago many of the stallholders on Great Homer Street were Irish, which gave it its nickname, Paddy’s Market. Many of the people in Liverpool are Irish decedent, so there was a sense of connection there for Wood; the women sometimes reminded him of his mother. His wife worked as a midwife at the Liverpool Women’s Hospital, while Wood worked two days a week, first as a photo technician at the School of Art, and later as a part-time lecturer, spending the rest of his time photographing.

All the years that I made pictures in Liverpool, we were short of money,” says Wood. “Colour photography was expensive.” To cut costs, Wood swapped between outdated color and black and white film; sometimes he would buy old cine film and roll his own, and he often carried around two cameras – one for color, and another for black-and-white.
“I’m just interested in good photographs,” he says, “I’m not a documentarist. I’m not trying to document anything. It’s more about deciphering and transforming. I make what you might call real-life photographs.”