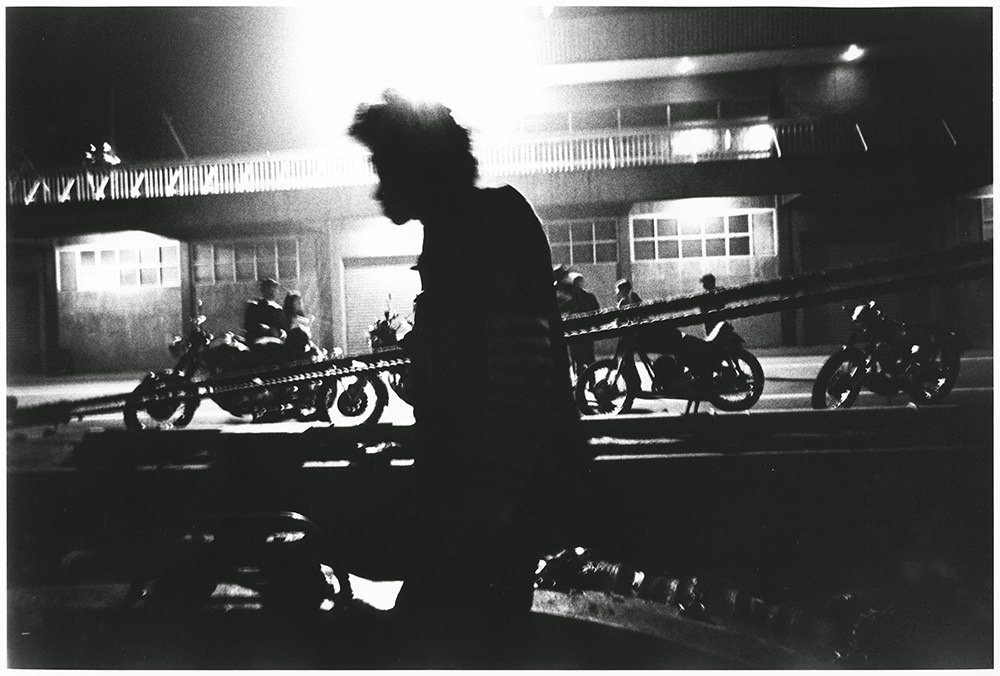 SUPER LABO announced the release of the new book “Fujisaki” by Bishin Jumonji.
The book comes out in conjunction with the exhibition at Super Labo Store in Tokyo, until October 24, 2020.

“I took the photographs in this book Fujisaki during the period from the late 1960s to the early 1970s, when I had not yet become a professional photographer. This was practically the first work,   I was a student of Kanagawa Technical Senior High School in Yokohama when I met Masaki Fujisaki, the subject captured in these photographs, for the first time. He was 15 years old and I was 16 years old then. Although it was 57 years ago, I can still recall the moment quite vividly. He showed up long-haired, wearing black leather pants and boots and smelling like hair liquid. He was also wearing a button-down shirt, which was not so common in those days.

As we became close, we found there was chemistry between us, and we would hang out together almost every day. We frequented Chigusa, a Jazz cafe in Noge, Yokohama, to listen to modern jazz that was fashionable then, requesting records by musicians such as Ornette Coleman, John Coltrane, Eric Dolphy, and so on. Excited by Scorpio Rising, the movie by Kenneth Anger, we tried to follow the way of life of Beatniks, such as William Burrows, Allen Ginsberg, and Jack Kerouac. And we often drank whiskey together. It was also he who introduced me to Kazuo Ohno, one of the pioneer butoh dancers. This was at a time before rock ‘n’ roll and punk were widely accepted.

Back then, I had no idea which direction to head for the future. Nevertheless, I was somewhat big-headed and full of baseless confidence. I did not know where my self-confidence came from but, honestly, I just wanted to do something different from what others did and otherwise, I would not care; that was all.

When I began to pursue a path as a photographer at the age of 20 by chance, I decided to take photographs of Fujisaki to keep a record. I went to Yumenoshima, a reclaimed island on the Tokyo Bay coast, riding on my ‘chopped’ motorbike, a Tohatsu Runpet. We frantically ran around along the long straight road and eventually destroyed my bike and set fire to its gas tank.

Fujisaki’s wildly laughing face seemed to be proof of my excitement.  His voice heard through my viewfinder was my own shouting, and my act of photographing him felt like I was observing myself back then.” (Bishin Jumonji)

Bishin Jumonji is a photographer who has done advertising, portrait, architectural, and other work. Jumonji was born in Yokohama on 4 March 1947.

His debut work “Untitled” (no heads) was invited to display in the “New Japanese Photography” exhibit at the New York Museum of Modern Art (MoMA) in 1974.  Throughout his career, he has tried to broaden the image of photography by delving deep into the memories and psyche of the viewer.

He received two National Endowment for the Arts Photographers Fellowships, a N.E.A survey and publication grant, the Dorothea Lange Fellowship and a fellowship from the Erna and Victor Hasselblad Foundation as well as grants from the Soros Open Society Institute, the American Film Institute, the California Arts Commission, International Fund for Concerned Photography, the Rosenberg Foundation and the Max and the Anna Levinson Foundation as well as the Johnathan Logan Family Foundation. Other awards include the Media Alliance Meritorious Achievement award in photography, the Thomas More Storke International Journalism Award.