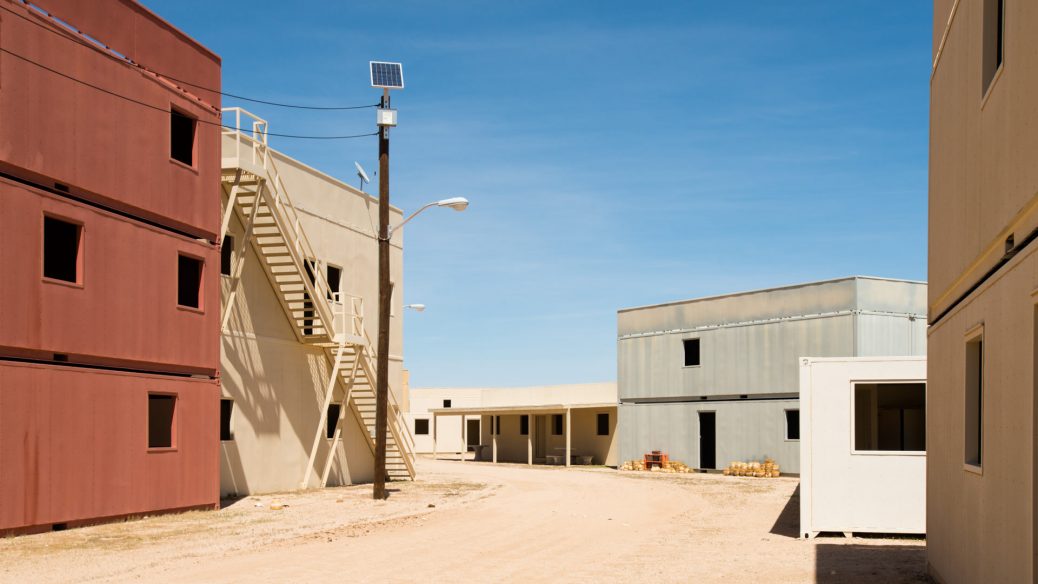 “Necessary Fictions” is a forthcoming book and multimedia installation exploring the performance of American power and identity in this militarized, post-9/11 era. In this time of perpetual war, constant vigilance, and political division, what are the games we play, the stories we tell, to manage unsettling realities? How are fictions deployed and embraced, and to what end?

Made on ten military bases across the United States since 2016, “Necessary Fictions” documents mock-village landscapes in the fictional country of “Atropia” and its denizens, roleplayers who enact versions of their past or future selves in realistic training scenarios. Costumed Afghan and Iraqi civilians, many of whom have fled war, now recreate it in the service of the U.S. military. Real soldiers pose in front of camouflage backdrops, dressed by Hollywood makeup artists in “moulage”—fake wounds—as they prepare to deploy.

“Necessary Fictions” was shortlisted for the 2019 & 2020 Tim Hetherington Trust Visionary Award and the 2019 W. Eugene Smith Memorial Fund Grant. Production of this work-in-progress is supported in part by a 2019 NYSCA/NYFA Artist Fellowship, a Leica Women Foto Project Award, the Harpo Foundation, and a Center for Emerging Visual Artists Fellowship.
Fiscally sponsored by the New York Foundation for the Arts (NYFA).

Debi Cornwall is an American conceptual documentary artist returned to visual expression in 2014 after a 12-year career as a wrongful conviction lawyer. Marrying dark humor and empathy with structural critique, she employs photographs along with archival material, testimony, sound, and video to examine American power and identity in the post-9/11, “War-on-Terror” era.

Cornwall studied photography at RISD while completing a degree in Modern Culture and Media at Brown University. After working for photographers Mary Ellen Mark and Sylvia Plachy, as an AP stringer, and as an investigator for the federal public defender’s office, she attended Harvard Law School and practiced for more than a decade as a civil rights attorney. Exhaustive research and negotiation were critical to her advocacy and remain integral to her work as an artist.