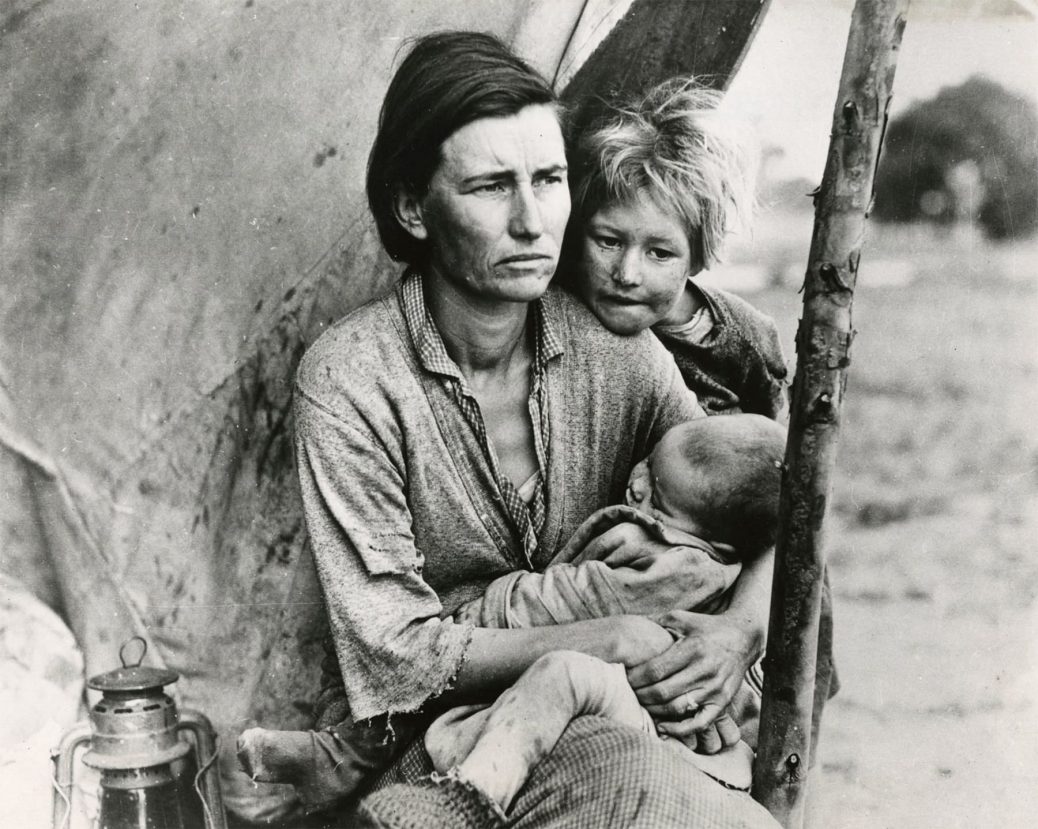 Dorothea Lange (1895–1965) was a photographer whose portraits of displaced farmers during the Great Depression greatly influenced later documentary photography.

During the Great Depression, Dorothea Lange photographed the unemployed men who wandered the streets. Her photographs of migrant workers were often presented with captions featuring the words of the workers themselves. Lange’s first exhibition, held in 1934, established her reputation as a skilled documentary photographer. In 1940, she received the Guggenheim Fellowship.

Her success won the attention of Roosevelt’s Resettlement Administration (later the Farm Security Administration), and in 1935 she started photographing the rural poor under its auspices. One day in Nipomo, California, Lange recalled, she “saw and approached a hungry and desperate mother, as if drawn by a magnet.”

The woman’s name was Florence Owens Thompson, and the result of their encounter was seven exposures, including Migrant Mother. Curator Sarah Meister‘s essay provides a fresh context for this iconic work.

“The history behind Ms. Lange’s photograph of Florence Owens Thompson has intrigued academics and photographers for decades. But a new book sheds fresh light on the portrait’s little-explored details.” (James Estrin, The New York Times)

Though Lange had been operating a successful portrait studio in San Francisco since 1919, she was moved by the homeless and unemployed people she saw standing in breadlines as the Great Depression began to take its toll, and she started photographing them. These photographs led to her hiring by the federal Farm Security Administration (FSA).

Lange closely identified with the FSA’s mission, which was to document the effects of the Depression on Americans, bringing attention to their struggles so that such events would never recur.3 Due in part to her work with the FSA, Lange became known as a pioneer of documentary photography, a classification she disliked because she felt the term did not reflect the passionate social motivations that fueled her work.

For further information and to buy the book visit the MoMa Store.

To better know Dorothea Lange see also the 2014 movie about her:

Grab a Hunk of Lightning, a 110-minute film narrated and directed by Dorothea Lange’s granddaughter, award-winning filmmaker Dyanna Taylor, tells the compelling story of the passion, vision, and drive that made Lange one of the most important documentary photographers of the 20th century.
The film explores the life, passions and uncompromising vision of the influential photographer, whose enduring images document five turbulent decades of American history.

More info on Grab a Hunk of Lightning website.