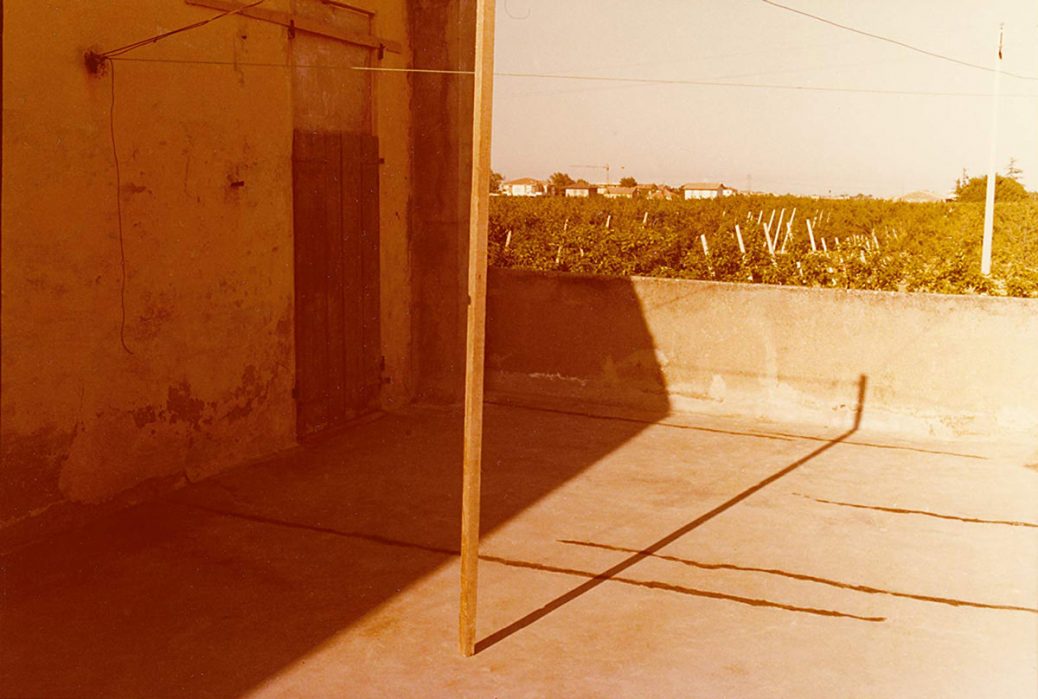 Selected from Guido Guidi’s archive by Marcello Galvani, this book presents 94 color photographs made with small-format cameras between 1976 and 1981. Mostly unpublished, these images form an ideal link between two phases of Guidi’s work that are already well known.

After the irreverent black and white snapshots of the early 1970s, this series marks Guidi’s progressive shift toward the colorwork he began to investigate in the early 1980s with a large format 8×10 camera. Here we already see the photographer’s growing fascination with his quotidian landscape, including vernacular buildings, ordinary people, and visual accidents, yet caught with a quick, peripatetic eye that questions the possibility of grasping the flux of experience and the notion of photographic time.

“Tra l’altro” – which translates as incidentally, by the way, or among other things – acts as a historical moment of transition in Guidi’s visual thinking, but also, in his own words, as “passing observations” and a way to “make contact” with the outside world.

Guido Guidi (Cesena 1941) is considered the Italian photographer who more than any other, has explored the boundaries and margins of the contemporary landscape avoiding any nostalgic romanticism and any form of spectacularization.

Close to the photographic research of Luigi Ghirri – with whom he has repeatedly worked in similar researches on the territory (the Archive of space by the Province of Milan, Journey to Italy and Explorations on the Via Emilia. Views in the landscape) was part of that group of authors (including Gabriele Basilico, Mimmo Jodice, Giovanni Chiaramonte, Vincenzo Castella, and Olivo Barbieri) who at the beginning of the 1980s renewed the Italian photographic tradition by opening it to a discreet, subdued, interrogative language. Like the American Lewis Baltz, he has often focused his attention on the intermediate spaces, on the marginal, “remaining” places, excluded from any strong signification and also from our own conscious gaze.

He exhibited at the Guggenheim Museum and the Whitney Museum in New York, at the Center Pompidou in Paris and at the Venice Biennale. His work has been published in many books and catalogs, including Variants (Udine 1995); and SS9. Itineraries along the via Emilia (Rubiera 2000); in addition, for the Canadian Center for Architecture in Montreal, he has created: Carlo Scarpa, Architect: Intervening with History (New York, 1999); Mies in America (New York 2001); In Between Cities (Rubiera 2003). He teaches photography at the University Institute of Architecture in Venice and at the Academy of Fine Arts in Ravenna.