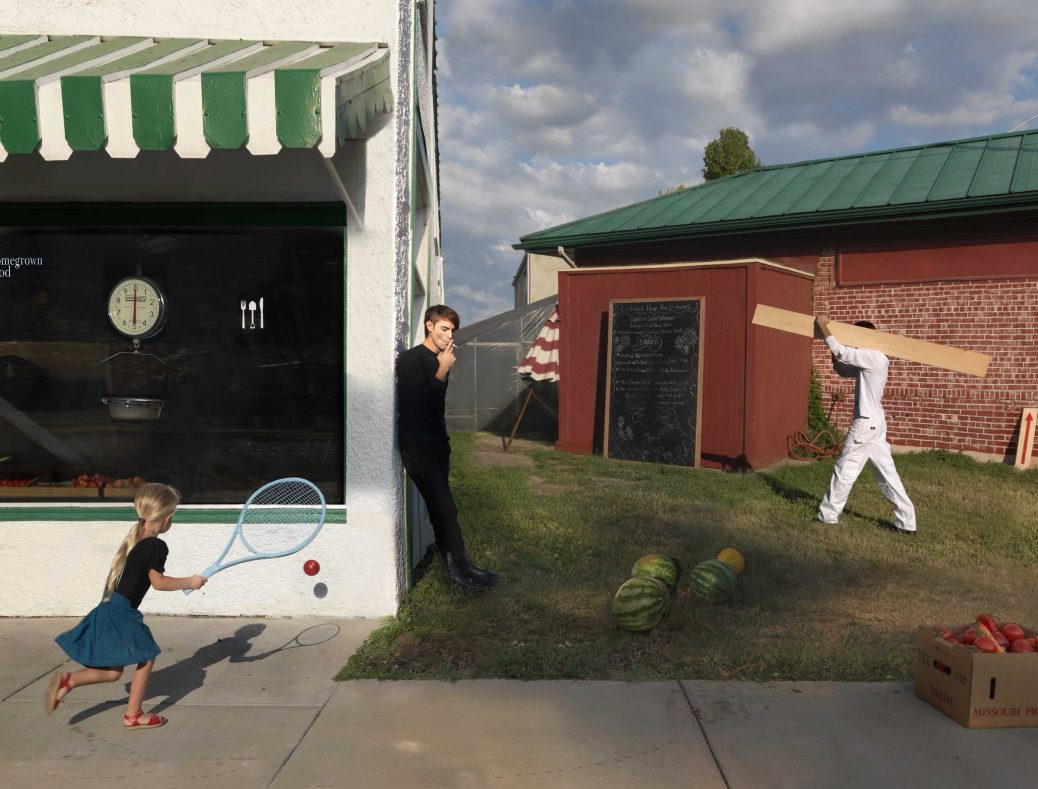 Robert Mann Gallery is pleased to present, Talent Show, an exhibition that draws from Julie Blackmon’s latest collection of theatrical photographs, until October 17, 2020.
There is a dreamlike quality to Blackmon’s imagery. Children live, play, grow bored, make up stories, act them out, and play some more, as if unaware of the camera, while the artist devises a tableau of domestic entropy. Blackmon says, “I compare [my work] sometimes to fiction and literature; sometimes the greatest truth can come out of fiction.”

Drawing influence from her own family life, the Dutch master Jan Steen and French modernist painter, Balthus, Blackmon creates photographs that have an air of a past era — perhaps the 1950’s or ’60s — yet her use of 21st-century iconography, such as a perfectly placed iPhone recording a makeshift Talent Show, tells us that they are quite contemporary. Blackmon sets her scenes in familiar environments like a backyard bathing session or a fixer-upper house and sometimes with multiple competing narratives at once. She focuses on children and families that are imbued with personality, yet overtaken by the haphazardness of child-rearing despite all the best-laid plans.

Julie Blackmon lives and works in Springfield, Missouri. The artistʼs work is found in numerous museums and public collections including the George Eastman House; Nelson Atkins Museum of Art; Museum of Fine Arts, Houston; Kemper Museum of Contemporary Art, Kansas City; the Portland Art Museum; and the Musée Français de la Photographie in Bièvres, France. She was named American Photo’s “Emerging Photographer of 2008” and one of PDN’s “30 New and Emerging Photographers” in 2007 and has been the recipient of various awards including first prize from The Santa Fe Center for Photography in the Project Competition in 2006. Blackmon has had two monographs published, the first of which sold out, Domestic Vacations (Radius Books, 2008) and Homegrown (Radius Books co-published with Robert Mann Gallery, 2014).

Her photographs are updated with a satirical, penetrating eye and Blackmon’s belief that artful fiction can capture the truth more memorably than the truth itself. “I deeply admire the photojournalism of Robert Frank, Diane Arbus, and Garry Winogrand. But I am not practicing journalism, and I do not use my camera as those photographers did. I think of myself as a visual artist working in the medium of photography, and my assignment is to chart the fever dreams of American life.” (Julie Blackmon)

Julie Blackmon is a contemporary American photographer. Drawing from her own family life, Blackmon creates digitally manipulated images set in familiar environments—like a backyard barbecue or grocery store—in which multiple competing narratives take place at once.

Both humorous and serene, her scenes often focus on children and families that are imbued with pathos and a fascination with the everyday. “I’ve lived in Springfield, Missouri, my whole life, in the same neighborhood, surrounded by my five sisters,” she has explained. “I’m inspired by everyday things—like this FedEx truck delivering a chair. I like to exaggerate what I see and experience, though, like writers and film-makers do. There’s a point when it becomes fiction, but what should come through is the stress, chaos, darkness, and charm of everyday life.” The artist notably draws also inspiration from the raucous tavern scenes of 17th-century Dutch painters, like Jan Steen, in creating her lively tableaus.

Born in 1966 in Springfield, MO, Blackmon enrolled at Missouri State University where she studied the work of Sally Mann and Diane Arbus. She would leave college before finishing her degree and resumed photographing years later when she was a mother of three and took up her domestic experience as a focus for her early work. Today, Blackmon’s works are in the collections of the George Eastman House in Rochester, the Kemper Museum of Contemporary Art in Kansas City, the Museum of Fine Arts in Houston, and the Portland Art Museum, among others. She continues to live and work in Springfield, MO. (via Artnet.com)