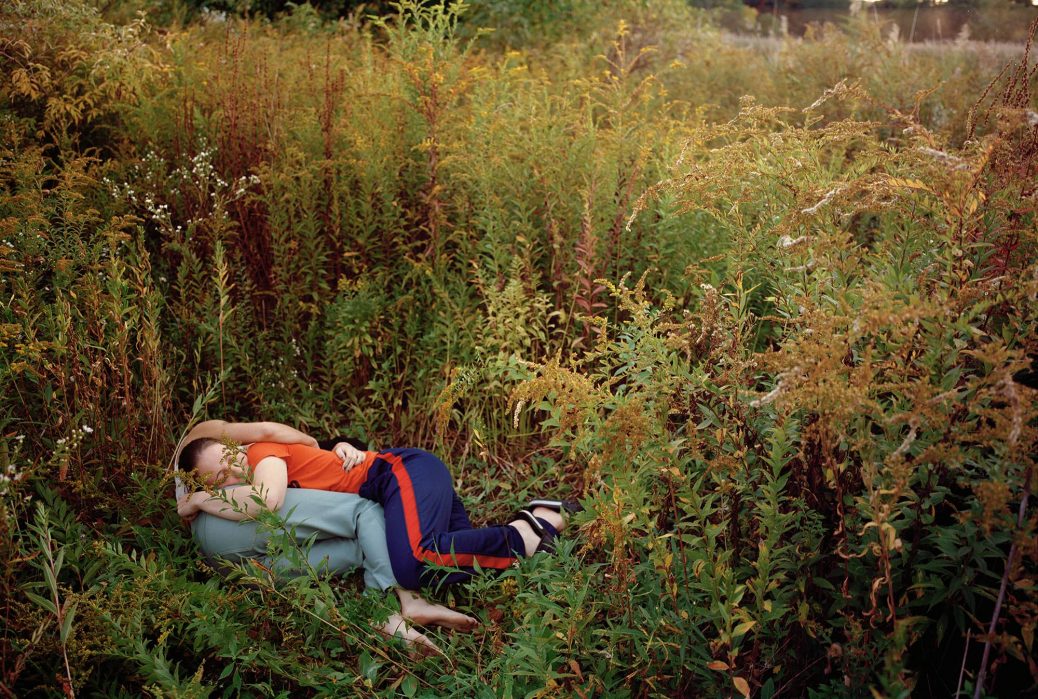 Photographer Justine Kurland reclaimed this space in her now-iconic series of images of teenage girls, taken between 1997 and 2002 on the road in the American wilderness. “I staged the girls as a standing army of teenaged runaways in resistance to patriarchal ideals,” says Kurland.

She portrays girls as fearless and free, tender and fierce. They hunt and explore, braid each other’s hair, and swim in sun-dappled watering holes—paying no mind to the camera (or the viewer). Their world is at once lawless and utopian, a frontier Eden in the wild spaces just outside of suburban infrastructure and ideas. Twenty years on, the series still resonates, published here in its entirety and including newly discovered, unpublished images.

Justine Kurland is known for her utopian photographs of American landscapes and the fringe communities, both real and imagined, that inhabit them. Her early work comprises photographs, taken during many cross-country road trips, which reveal the double-edged nature of the American dream.

In series such as Golden Dawn (2001-2003) and Mama Babies (2004-2007), Kurland presents a reality where utopia and dystopia are not polar opposites, but rather fold together in an uneasy coexistence. In speaking about her first and, perhaps, most celebrated body of work, Girl Pictures (1997-2002), Kurland describes her practice as navigating “the spectrum between the perfect and the real.” The artist’s most recent body of work, however, eschews her former itinerant lifestyle with pictures that focus instead on the intimate, private spaces of her New York apartment or her mother’s home in rural Virginia.

Justine Kurland was born in 1969 in Warsaw, New York. She received her BFA from the School of Visual Arts, New York in 1996, and her MFA from Yale University in 1998. Her work has been exhibited extensively at museums and galleries in the United States and abroad. Her recent gallery exhibitions include Girl Pictures, 1997-2002 at Mitchell-Innes & Nash, New York (2018) and Airless Spaces at Higher Pictures, New York (2018). Museum exhibitions have included The Open Road: Photography and the American Road Trip at the Detroit Institute of Arts, Detroit (2016), Into the Sunset: Photography’s Image of the American West at the Museum of Modern Art, New York (2009) and Role Models: Feminine Identity in Contemporary American Photography at the National Museum of Women in the Arts in Washington, D.C. (2009).