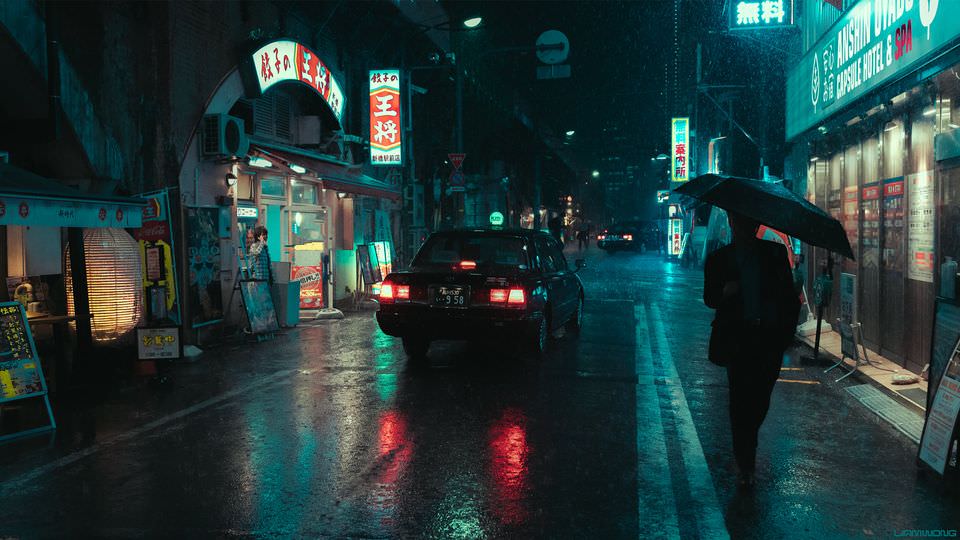 Born and raised in Edinburgh, Scotland, Wong studied computer arts in college and, by the time he was twenty-five, was living in Canada and working as a director at one of the world’s leading video game companies. His job took him to Tokyo for the first time, where he discovered the ethereality of floating worlds and the lurid allure of Tokyo’s nocturnal scenes. “I got lost in the beauty of Tokyo at night,” he explains.

A testament to the art of color composition, this book – art directed by Wong himself and produced to the highest printing standard – brings together a complete and refined body of images that are evocative, timeless, and completely transporting. Rounding out the volume’s special treatment is the first publication use of the 45/90 font, designed by Henrik Kubel, of London-based A2-TYPE.

The book also features a section that reveals the creative and technical process of Wong’s method, from identifying the right scene to making a good composition, from capturing the essence of a moment to enhancing color values and deepening an image’s impact – insights that will be invaluable to admirers and photography enthusiasts alike.

Liam Wong -リアム・ウォン – is a director, game designer and photographer, best known for defining, designing, and directing visual identities and was listed as one of Forbes Magazine’s influential 30 Under 30.
Born and raised in Scotland – within two years of graduating, Wong moved to Canada – becoming the youngest director at Ubisoft, the video game company behind Far Cry and Assassin’s Creed. In parallel with his blossoming career in video games, Wong was teaching himself photography.

In December 2015 he purchased his first DSLR (a Canon 5D III) and his debut photo series: ‘Tokyo Nights (TO:KY:OO)’ – capturing the beauty of night through moments after midnight – inspired by sci-fi, neon-noir, cyberpunk, and Japanese animation – gained over a million views worldwide, accumulating a following online and kickstarting his journey into photography.

Wong has since collaborated with many high profile companies, artists, musicians, and directors. His work has been recognized by media outlets such as BBC, Forbes, Business Insider, Saatchi and Adobe. Full press list available here. In 2019 ‘TO:KY:OO’ became the largest crowdfunded book in the UK. It is available for purchase at: TO:KY:OO. Includes words by game creator Hideo Kojima and visual futurist Syd Mead.

Wong is now freelance and working on unannounced projects across film, video games and photography. Available for collaborations. A regular public speaker – Wong has spoken at events around the world and is always open for opportunities to share his expertise. Past public speaking events include the British Academy of Film and Television Arts, Game Developers Conference and Canon.