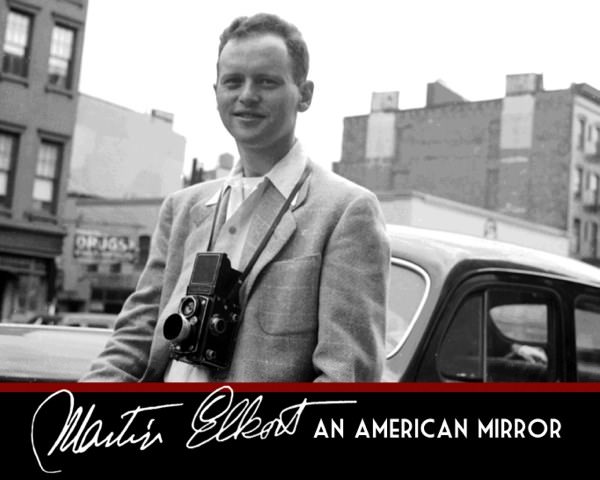 Exploring the life and work of New York street photographer Martin Elkort, An American Mirror is the documentary debut of his daughter, Houston-based Stefani Twyford.

An American Mirror chronicles Elkort’s life growing up in New York during the Great Depression, serving in World War II, being stricken by polio and discovering his affinity for documentary photography.

In the 1940’s and 1950’s, Martin Elkort roamed the urban landscape of New York City with his camera in search of the perfect picture. His indelible images of simpler times remind us that the human experience can be a joyous one. Poignant and insightful, his photographs reflect the Great American Melting Pot in all its unpolished glory.

Exploring the life and work of noted New York street photographer Martin Elkort, An American Mirror is a heartfelt tribute and educational documentary created by his daughter, award winning producer Stefani Twyford of Legacy Multimedia. More than just a study of Martin’s work, An American Mirror is an intimate visit with a truly interesting character who shares stories about the history of American photography along with major events that changed the nation.

An American Mirror chronicles Elkort’s winding journey from his boyhood in New York during the Great Depression to a young man coming of age in the new world of documentary photography.

Educated at the Cooper Union, Elkort was also a member of the renowned New York Photo League where he studied under, and shared darkrooms with Aaron Siskind, Lou Stoumen and Sid Grossman, among others. It documents his story of moving away from street photography in order to support his growing family, and of his journey back when he retired and found a growing interest not only in the Photo League, but in his own work as well. The documentary follows his evolution as an artist with an emotionally honest photographic eye and as a respected writer.

Martin Elkort (American, b. April 18, 1929 – d. November 19, 2016) was born in New York and grew up amidst the Great Depression. He took his first professional photograph at the age of 10 while on a car trip with his family in Baltimore. The Baltimore Sun purchased his photographs of submerged cars during a flood and at that point, he was hooked on photography. At the age of 15 Martin came down with polio and spent 4 months in the hospital. When he returned home, his parents bought him his first Ciroflex, a twin-lens reflex camera, that cost them about a week’s salary at the time. After his recovery, he set out around Manhattan taking pictures of whatever interested him.

While studying painting at Cooper Union in New York City, Martin joined the New York Photo League, an organization of photographers that served as the center of the documentary movement in American photography. There he studied under masters and learned to become adept at what he refers to as ‘stealth photography.’ With his camera strapped around his neck, he would walk peering down into the 2×2 inch ground glass of the camera. He developed the skill of walking right up to a person and taking their photo without them even realizing it. During this period he worked at the Wildenstein & Company Gallery where he further enhanced his photographic knowledge and technique.

After marrying in 1953, he realized he would have to support his family by means other than photography. He moved to New Mexico where he was an art editor and staff photographer for New Mexico Magazine. His family moved to Los Angeles in the early 1960s,they spent some time in Alaska and then moved back to New York, where Martin worked in the travel industry. After retiring in 1996, Martin wrote several books and magazine articles, worked as a food critic, and re-ignited his interest in photography. He currently lives in Los Angeles with his wife where he continues to enjoy his street photography. He also writes articles about photography for Rangefinder and Black & White Magazine.

Martin Elkort’s work is widely exhibited and can be found in the permanent collections of The Museum of Modern Art, The Getty Museum, The Columbus Museum of Art, The Museum of Fine Arts Houston, The Holocaust Museum in Washington DC, The Jewish Museum in Brooklyn as well as many corporate and private collections.

Watch the complete documentary on Vimeo. Learn more about Martin Elkort at his website.