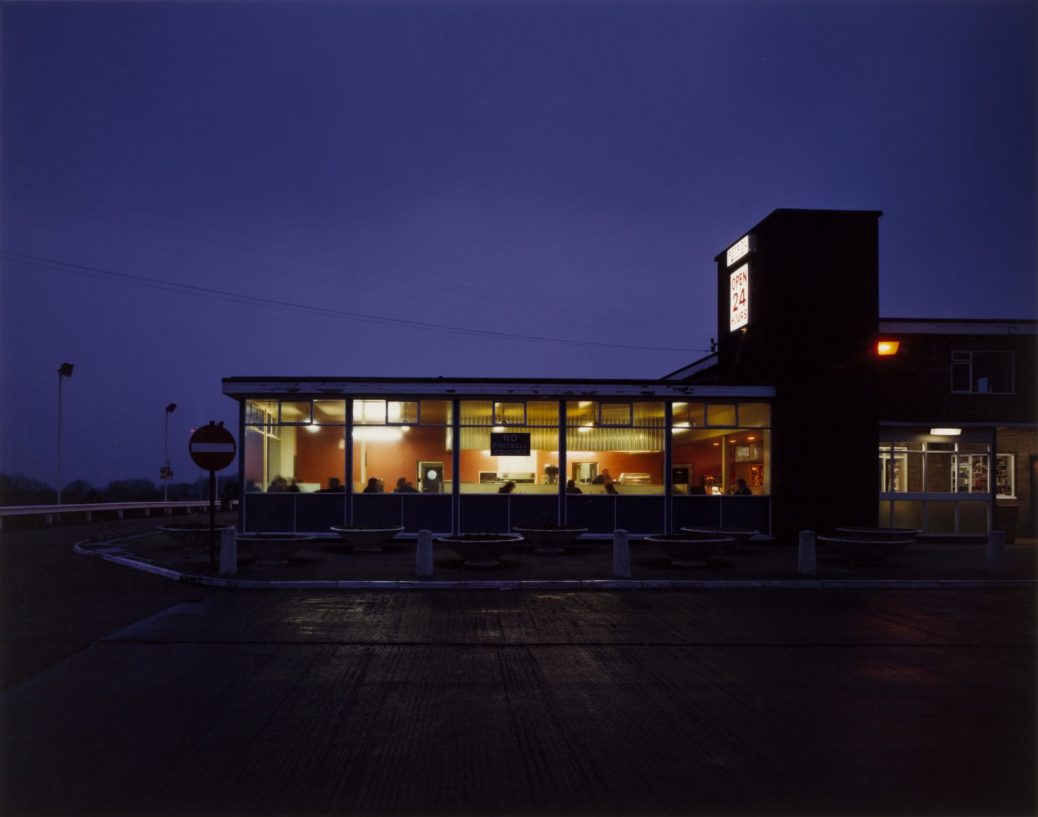 “A1 – The Great North Road” was Paul Graham’s first book, published in 1983. Despite the UK having a vibrant photographic scene at the time, there were only handful of monographic books – Chris Killip and Martin Parr had one each – and no dedicated publishers or distributors. Graham had to self-publish A1, but as the first colour book, it had a startling impact on British photography. Uniting the tradition of social documentary with the fresh approach of new colour, “A1 – The Great North Road”  was transformative on photography in the UK and paved the way for a new generation of British colour photographers to emerge, from Nick Waplington to Anna Fox, Richard Billingham to Tom Wood.

Spanning the full length of England and into Edinburgh, Graham travelled repeatedly along the ‘Great North Road’ with a large format camera, to record the people, buildings, and landscape of early 1980’s Britain. Now 40 years old, this book is as much art as it is a historical document of the years of Margaret Thatcher’s government and the UK’s declining industrial base. Graham went on to complete Beyond Caring (1985) and Troubled Land (1986), both of which became iconic bodies of work. Originally self-published and now rare, Graham’s 1980’s trilogy of books will be re-published over the coming years by MACK, ending with a limited edition box set of all 3 volumes.

Paul Graham (born 1956) is a British photographer living and working in New York City.
Graham has been a prolific and well-published artist, including two survey monographs, by SteidlMack (2009) and Phaidon (1996), along with 10 other publications. One book, Empty Heaven, is devoted to Japan; another, A Shimmer of Possibility, comprises 12 volumes examining the nominal life in the USA.

In 1981, Graham completed his first acclaimed work, A1: The Great North Road, a series of color photographs made along A1, Great Britain’s longest numbered road. His use of color film in the early 1980s, at a time when British photography was dominated by traditional black-and-white social documentary, had a revolutionizing effect on the genre. Soon a new school of photography emerged with artists like Martin Parr, Richard Billingham, Simon Norfolk, and Nick Waplington making the switch to color. In 2011, The Museum of Modern Art, New York, acquired the complete set of prints from The Great North Road, the original set Graham had used to print his first book in 1983.

Over the past three decades, Graham has travelled widely, producing twelve distinct bodies of work. He has been the subject of more than eighty solo exhibitions worldwide.His work has been exhibited extensively – notably participating in the Italian Pavilion of the 49th Venice Biennale (2001), the inaugural exhibition at Switzerland’s national Fotomuseum Winterthur, and most recently a solo exhibition at New York’s Museum of Modern Art. He was one of the 24 photographers included in the Tate Gallery’s landmark “Cruel and Tender” survey exhibition of 20th century photography (2003), and a European mid career survey exhibition at Museum Folkwang, Essen, and touring from 2009–2011 to the Deichtorhallen, Germany, and Whitechapel Gallery, London.